Prominent in the news from Israel is the the government of the State of Israel's intention to further disenfranchise its Palestinian citizens. Prime Minister Netanyahu's swoop to the right is part of his electoral bid  to win over the voters of Naftali Bennet and others on the far right. So, added to the existing legal, institutional and social discrimination against non-Jews, the cabinet approved a bill to declare the State of Israel as "the nation-state of the Jewish People." The unsustainable Israeli paradox: "Jewish and democratic" continues to be resolved to: "democratic for the Jews; Jewish for everyone else."

Media reports reflect how troubling this bill is to the 20% of non-Jewish Israeli citizens, legally classified in the Population Registry as non-members in the Jewish People. Demonstrating the bizarreness of this bill is its meaning for the Jews around the world it claims to represent. These Jews have not been asked if Israel represents them, cannot vote in Israeli elections and have no democratic authority to impact its policies, yet the bill implicates them in Israel's actions. The Israeli nationalism bill is so patently undemocratic that the United States has weighed in,  pressing Israel to drop it.

A key emblem of Israel's disenfranchisement of its Palestinian citizens is the country's national anthem, Hatikva (The Hope). Written 70 year before the State of Israel was founded, the lyrics express the dreams of the first Zionists, the secular, nationalistic Eastern European Jews. The vanguard of what was to become the new state  immigrated to Palestine 100 years ago, in the so-called "Second Aliya". They created modern Hebrew and they went on to found the institutions that formed the nucleus of the State of Israel. Hatikva is still an important expression of American Jewish solidarity with the State of Israel.

Famously, Hatikva manifests several unresolvable problems:
* Israel's national anthem does not represent the story of millions of Israeli Jews or their parents who moved there from the Arab world. These Arab Jewish communities were not "Zionist", certainly not in a European nationalist sense. Secondly, when those communities did think about Jerusalem and Zion they turned westward  Iraqi Jews, Iranian Jews, Soviet Asians and so on are beyond Hatikva's "end of the east."
* Hatikva (written: 1878)  anachronistically attributes post-dates 19th century secular nationalism  to a time two millennia earlier!
* The evocative musical setting (famously a close replica of Smetana's Die Moldau an) is representative of  19th century settings of European folk music. It does not express the soulful yearnings of North Africans or non-acculturated Hassidic Jews.

But the most egregious distortion of Hatikva is erasing any mention  of a Palestinian presence thus precluding any Palestinian stake in Israel's "Hope."

So, I am offering a new version of Hatikva. I don't expect it to catch on. Actually, I wouldn't want it to. Let the Israelis and Palestinians work out the anthem issue between them. I am only offering this to demonstrate what is missing in the original.

It might help any Jew who is stuck in a tight spot and has to sing Hatikva at a Jewish communal event. You can use these words to get by. Here is the recording. (The Jewish practice of rewriting canonical, even sacred text, to convey contemporary values is time-honored.)

Suggestion for a New Hatikva":

My reading during these last few weeks of horror in Gaza has been a travelogue, by the rabbi behind the establishment of my synagogue in 1955. Rabbi Elmer Berger was executive president of the American Council of Judaism from its founding in 1942, in the wake of the Zionist Biltmore Conference. He wrote the travelogue, actually a series of long letters, to a founder of my synagogue, Buddy Coleman.

In April 1955, Rabbi Berger and his wife Ruth left for a two month visit to Middle East capitals, Baghdad, Cairo, Damascus and Jordanian and Israeli Jerusalem. He was treated by a VIP throughout the region. His schedule was filled with meetings with Jewish and top political leaders. He met with Chief Rabbis and leaders of the large Jewish communities. Foreign ministers and presidents welcomed him. Only in Israel was he treated differently.

"Who Knows Better Must Say So!" is full of prescient wisdom rooted in eyewitness reports, meetings with policy  makers and a clear worldview. Whole passages about Gaza and Israel leap off the page. I am working on a review of the book.

In light of reports today that Israel is planning to end the Gaza warfare unilaterally, here are excerpts from Rabbi Berger's reflections on his trip written from the boat on the way home, June 5, 1955.

The first is from an acquaintance of Berger's:

"Israel would like to have peace now - but not a very firm peace. That is, he believes the border raids [Berger is referring to Gaza, MD] and constant military tension maintained under the "retaliation" policy are designed to scare...in the hopes...[of] a kind of settlement. Then...Israel would be able to say it had won the peace with its own power and was under no international obligation, involving any of the great powers, to respect the peace at a time when it might be advantageous for Israel to forget such a peace....above all, Israel wants to avoid a Middle East peace which is internationally guaranteed...."

(italics in the original)
(Who Knows Better Must Say So! p. 106, by Rabbi Elmer Berger, American Council for Judaism 1955)

On who pays the price for what he saw as Israeli aggression, Berger has this to say:

"...the real, tragic victims of this are the Arab refugees and the man on the street in Israel...If present trends continue, we may see these unhappy people again the objects of suffering and homelessness."
(p. 107)

Finally, a theme which is central to Berger's book, which I will write more about later:

"Another victim...will be the American Jews. One can plead innocence for so long; and one can ask indulgence for excesses for so long because of extenuating circumstances. But the shape of Israel is now a palpable, responsible sovereignty which makes no bones about its "partnership" with all Jews. If the "partnership" is caught engaging in unethical practices however, it will be difficult for one of the partners to be free of guilt on the grounds that he did not know how the business was being run."
(ibid.)

Rabbi Berger's analysis could have been written this week.

When a Jewish Child Believes Jews are Bad

Since the beginning of Israel's military onslaught on Gaza, I have participated in two rallies and one prayer service. At all three events, I was treated with respect and welcomed warmly by many Palestinians. I wore my kippa and Jewish Voice for Peace T-shirt. People came up to me constantly, saying hello and asking to have their picture taken with me. People thanked me. They said they know that not all Jews are against Palestinians. They were eager to make a connection.

This is a picture (from behind, that's where the text on our T-shirts was)  of me with two Palestinian protesters at a rally in downtown Chicago on Monday. 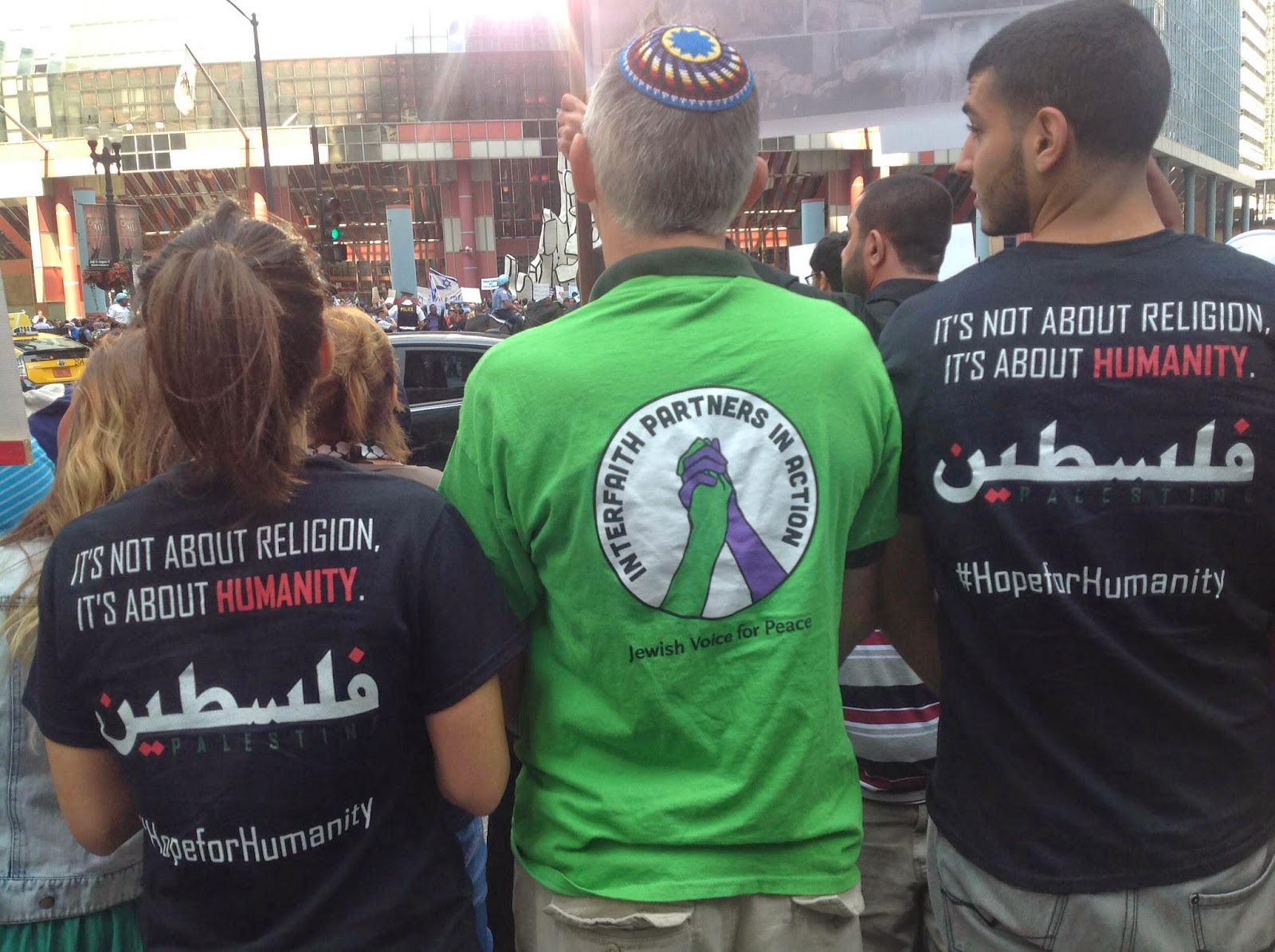 When I was growing up, we were taught to act in a way that was a Kiddush Hashem (literally: sanctifying God's name). This meant acting in public that brings non-Jews to relate positively to Jews.
I had to have a conversation with a young child today, a member of my family, who was beginning to see Jews as bad people because "they are killing people and hurting people." I told her that those doing the killing are not "the Jews". I asked her to look at all the members of her family and the congregation and see if they kill or hurt people.We went through a list of family members and other Jews. At the end, we were able to agree that Jews are good.

Amidst all the carnage and destruction in Gaza, this moment also brings a twinge to my heart. What a mirror, a young child holds up for us. In a Jewish child's eyes, Israel's war on Gaza means "Jews are bad people". Oy.
O what has become of us (Refrain of traditional lament of Tisha B'av)
Posted by Michael Davis at 7:38 PM 7 comments: